Register for a call today!

Learn to love your voice. If you feel that you lack control over your voice, that it lets you down, is holding you back, or simply that it doesn't represent you or doesn't do what you need it to do from time to time, you may benefit from vocal coaching. 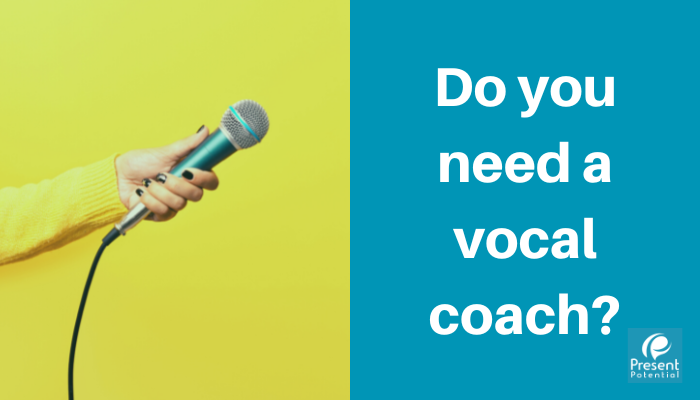 If you answer YES to any of the above, then vocal coaching may help you. I'm offering a short, intensive, personalised programme, designed to bring your speaking to the next level, specifically through focussing on the quality and control of your voice.

To find out more, register to schedule a call with me.

Is vocal coaching for me?

Answer the simple questions in the vocal assessment. If you answer "sometimes" or "often" to multiple questions, vocal coaching could indeed help you.

What can I expect from a vocal coaching package?

Your voice is like a muscle in your body—you can tone and strengthen it quickly, but to maintain your gains and keep growing, you need consistent coaching practice.

So, to lock in progress, keep improving, and continually correct your technique so you can avoid re-practicing unrecognized bad habits…the best, initial training program for speakers has 5 sessions of about 1 hour each. And they work like this:

For the timeline of your program, we’ll work to fit your schedule and practice routine, but most clients complete all 5 sessions within 2 months.

Speaking of results, you can start hearing improvement as soon as our first solution session, but for sustained, noticeable growth, it’s critical that you fulfill all 6 sessions and follow the practice plan we agree on, at the end of each session.

What kind of transformation can I expect?

The results you will experience depend on 1. the way you speak currently, 2. the goals you have, 3. how committed you are to dedicate some time and effort to regularly doing your vocal warm-ups and the other homework that I will give you.

I'm not a singer and don't want to be. Can I still get vocal coaching?

Absolutely, vocal coaching could still be useful for you. You do not need to be a singer.

The focus of the vocal coaching package is to develop your spoken voice. We will use Roger Love's vocal exercises to strengthen you vocal cords and your breathing, expand your pitch range and develop good habits.

Can the vocal coaching be held online?

Yes, absolutely. I like to meet with clients in person, whenever possible, but with vocal coaching sessions its just as efficient online. You will be able to book your sessions directly into my calendar and we will hold them online through my Zoom account.

Of course, if you live nearby (e.g. Suisse Romande) and we have the opportunity to meet up at least once, that would be fabulous (but absolutely not necessary).

Here's a good one:

After being promoted to a new directorial role, Annabel (name changed for privacy) – a senior employee at a UN agency - came to me to help her develop her voice which she “felt has always held her back.”

As a child, Annabel was told that she could not sing.

So, she stopped singing and it broke her heart because she really loved to sing.

Even at her weekly place of worship, she shied away from singing.

Since then, she has felt disconnected from, and almost embarrassed, by her voice.

But she was determined to work hard to become confident in her voice, so that it would adequately represent who she truly is and what she believes in.

Her dream was to be invited by senior management and her peers to speak at events and receive a standing ovation.

Annabel’s vocal baseline assessment showed that she did not have good breath control and used a limited range of pitch when she spoke.

With the support of Roger Love’s vocal warm ups, supplemented by exercises designed to further expand her vocal range and relax her when speaking and singing, Annabel has discovered a new, freer, more joyful voice.

Her voice sounds richer and she’s able to add more melody into her everyday speech.

Annabel now enjoys exploring her voice and the freedom that the higher range has given.

She even prepared a “showcase” performance for some close girlfriends to celebrate her “new” voice and to inspire them to stand up and speak up with pride.

She has recently been invited to facilitate a day-long training with some junior colleagues and is incorporating what she has learned and continues to practice so that her voice does not hold her back anymore.

Will she get a standing ovation? Time will tell but she’s certainly on her way!

Who's Roger Love? What's so special about his methodology?

The Roger Love Method of Voice Coaching for Speakers is the most trusted voice coaching method for speakers in the world. Over a million people have learned the Method’s techniques.

It was developed by Roger Love, who is the world’s foremost voice coach and he pioneered the industry of voice coaching for SPEAKERS, after being the top singing voice coach for decades. He’s the voice coach for Anthony Robbins and Reese Witherspoon, Selena Gomez, Steve Carrell, Tyra Banks, you name it--celebrities, CEOs, authors, influencers, comedians, they all want the Roger Love Method because it produces RESULTS. It’s helped speakers and leaders of nearly every industry, across the world, for almost 40 years.

If this is your first time working with a Roger Love Method Certified coach, that’s probably because there’s only a few of us in the entire world who have the Certification. Just a sneak peek into the process: you should know that, in order for me to earn this Certification, I had to apply and be selected, which has about a 15% acceptance rate, just to be able train for this credential. Then, for my training, I learned directly from Roger Love, LIVE. Then, I had to earn a perfect score—100%--on his Official Certification exam. And excellence is so important to us as RLMC coaches, we have to retake and re-pass the Official Exam at 100% every single year, just to maintain our credentials.

"Being a scientist, I usually focus on scientific facts with little attention to getting the message across effectively. The success I had with following Helen’s hand-on tips was striking. I never had that many people congratulating me after a presentation and I am convinced they understood and will remember my message. Helen also provided me with many resources that I can use to further improve my presentation skills.

I am sure her support will have a long-lasting impact on how I approach presenting in the future."

"Thank you very much Helen! Our session was not only very valuable but also very enjoyable. It felt like talking my event through with a good friend who also happens to be a top notch expert for speaking in public. Fantastic!"

Register for your free call

Provide your name and email address to get started.